After working with Balanchine on The Nutcracker, staging the battle with the Rat King in the ballet’s first act, Robbins choreographs Quartet.  On Broadway this year, he co-directs The Pajama Game with George Abbott and adapts, choreographs, and directs Peter Pan. 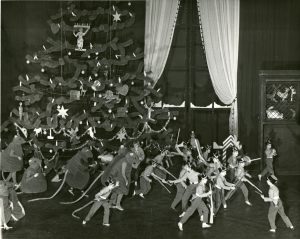