Jerome Robbins, By Himself: 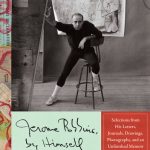 Selections from His Letters, Drawings, Photographs, and an Unfinished Memior

Edited with Commentary by Amanda Vaill

Provocative and illuminating. Amanda Vaill gathers a fascinating selection of illustrations, photographs, and writings from the personal archives of dance choreographer Jerome Robbins (1918–1998).  Eager to escape Weehawken NJ, Robbins attended college at New York University. In a journal entry, he writes, ‘There was no money to allow me to continue college… so then I decided I’d try dancing.’ He studied with Senya Gluck Sandor, then worked his way from chorus member to soloist in summer resort and Broadway shows, before discovering a talent for choreography. Vaill expertly weaves Robbins’s insight into his artistic accomplishments: Robbins debuted as a choreographer with Fancy Free in 1944, and shortly after told a reporter, ‘I was just another dancer. Now I’m supposed to be somebody and I can’t get used to that.’  As Vaill notes, Robbins went on to choreograph challenging pieces for the New York City Ballet, reinvent the American musical in such shows as High Button Shoes and On the Town, and jazz up many Broadway and film musicals including Fiddler on the Roof, Gypsy, and West Side Story. This portrait will delight dance enthusiasts.

Buy it on Amazon 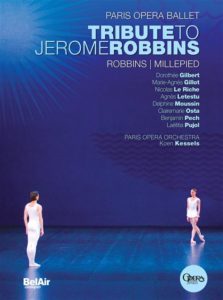 The program, performed by the dancers of the Paris Opera & Ballet, is a tribute to the world famous choreographer, on the tenth anniversary of his death, whose genius stretched across decades and art forms.

Jerome Robbins is perhaps best known for his choreography and co-direction of the massively influential film West Side Story and the Broadway hit Fiddler on the Roof. But Robbins was also an enormously successful choreographer for theatre and ballet during his lifetime and his works continue to be performed around the world. This program salutes Robbins by presenting the very different sides to his imagination, ranging from the playful to the intriguingly dark to the laugh-out-loud funny. Produced by François Duplat and Antoine Perset, directed by Vincent Bataillon, the program features Jerome Robbins’ ballets In G Major, In the Night, and The Concert and includes a world premiere by Benjamin Millepied. 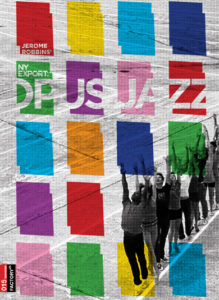 The first film conceived, created and danced by dancers from the New York City Ballet

Shot on location in New York City and starring an ensemble cast of New York City Ballet dancers, NY Export: Opus Jazz takes Jerome Robbins‘ 1958 “ballet in sneakers” and reimagines it for a new generation in this scripted adaptation. After winning an Audience Award at the 2010 South by Southwest Film Festival, the film aired nationally on PBS’ Great Performances series and was nominated for the Rose d’Or Award.

“A BALLET IN SNEAKERS: JEROME ROBBINS AND OPUS JAZZ” The director’s cut of the documentary by Anna Farrell and Matt Wolf which includes additional scenes not aired on television.

“JEROME ROBBINS’ BALLETS: USA” A documentary commissioned by the State Department in 1958 which includes footage of the original cast performing and rehearsing NY Export: Opus Jazz. 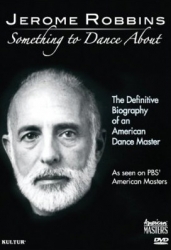 Jerome Robbins: Something to Dance About

No other creative figure of the latter twentieth century was as contradictory as Jerome Robbins, and few were as controversial. He was a master of the Broadway musical, transforming its possibilities with such works as West Side Story, Gypsy, and Peter Pan, and was one of the greatest ballet choreographers this country has ever produced.

Thirteen/WNET’s AMERICAN MASTERS profiles this complex mid-century artist in Jerome Robbins: Something to Dance About, premiering February 18, 2009 on PBS (check local listings). Directed and produced by six-time Emmy Award-winning filmmaker Judy Kinberg and written by best-selling Robbins biographer Amanda Vaill, the two-hour film is narrated by Ron Rifkin (Brothers & Sisters), who performed the roles of both Robbins and his father in a workshop production of the director/choreographer’s theatrical autobiography, The Poppa Piece. This first and only documentary on Robbins features excerpts from his personal journals, archival performance footage, and never-before-seen rehearsal recordings, as well as interviews with Robbins himself and over forty witnesses – among them Mikhail Baryshnikov; Jacques d’Amboise; Suzanne Farrell; Arthur Laurents; Peter Martins; Frank Rich; Chita Rivera; Stephen Sondheim; and Robbins’ Fiddler collaborators Jerry Bock, Sheldon Harnick, and Joseph Stein.

Somewhere: The Life of Jerome Robbins

Robbins (1918–1998) was the choreographic genius behind the 1957 Broadway hit “West Side Story” and other musical classics, in addition to such great ballets as “Fancy Free” and “Dances at a Gathering”. Vaill (“Everybody Was So Young: Gerald and Sara Murphy: A Lost Generation Love Story”) was given unprecedented access to Robbins’s personal papers after his death, and the result is a critically sophisticated biography that’s as compulsively readable as a novel. As she traverses Robbins’s growth as an artist, his ambivalence about his Jewish heritage, his bisexuality and his relationships with other artists from Balanchine, to Bernstein to Baryshnikov, she writes with both passion and compassion. More than Deborah Jowitt in her recent Robbins bio, Vaill delves into Robbins’s personal life, quoting frequently from his diary and letters. But the result isn’t salacious; rather, it allows a more vibrant and vital rendering of the man. Known for being very harsh on dancers, Robbins was called everything from “genius and difficult to tyrant and sadist,” says Vaill, “yet the work… was marked by an ineffable sweetness and tenderness.” In her balanced, sensitive portrait of an American theatrical genius, Vaill captures these contradictions elegantly. The book is essential reading for lovers of theater and dance. (Nov. 21)
Copyright © Reed Business Information, a division of Reed Elsevier Inc. All rights reserved.
– Publishers Weekly 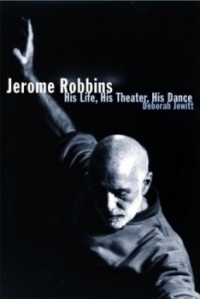 Jerome Robbins: His Life, His Theater, His Dance

Jerome Robbins’s story is as distinctively American as his choreography. Born Jerome Wilson Rabinowitz in New York City to Russian-Jewish immigrant parents, Robbins (1918–1998) became a Broadway chorus boy in 1938 before joining Ballet Theatre and New York City Ballet, ultimately dancing lead roles. Robbins also became one of the 20th century’s most highly regarded choreographers, including for the 1957 Broadway hit “West Side Story”. Other Broadway successes include “On the Town”, “The King and I” and “Peter Pan”, and significant ballets such as “Fancy Free”, “The Cage” and “Dances at a Gathering”. With precision, lucidity and insight, Village Voice dance critic Jowitt (“Time and the Dancing Image”) chronicles Robbins’s extensive career, as well as his struggle with bisexuality, ambivalence about his Jewish heritage, and his decision to name names before the House Committee on Un-American Activities in the 1950s. Given unrestricted access to Robbins’s personal and professional papers, Jowitt adds a new vulnerability and humanity to the legend: Robbins was infamous for his perfectionism, insecurity and temper. “I… still have terrible pangs of terror when I feel my career, work, veneer of accomplishments would be taken away,” wrote the man who worked alongside Bernstein and Balanchine, “that I panicked & crumbled & returned to that primitive state of terror —- the facade of Jerry Robbins would be cracked open, and everyone would finally see Jerome Wilson Rabinowitz.” Both critically sophisticated and compulsively readable, this is a must for theater and dance devotees.
Copyright © Reed Business Information, a division of Reed Elsevier Inc. All rights reserved. –This text refers to the Hardcover edition.
– Publishers Weekly 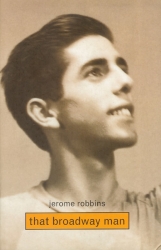 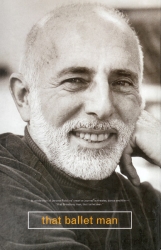 This first-ever book on the director and choreographer, Jerome Robbins – written by a close friend of thirty years – takes the reader on a magical tour of a genius at work. Using hundreds of never-before-seen images, Christine Conrad has put together a stunning pictorial biography of the renowned director and choreographer of such major theater works as West Side Story, Peter Pan, Fiddler on the Roof, and a principal choreographer for over forty years at New York City Ballet.

Family snapshots, rare photographs of Robbins as a young actor and dancer, backstage and rehearsal pictures, production photographs, old clippings – all these important artifacts documenting the life of this unique artist are given context by Conrad’s interlinking text and the use of Robbins own words culled from interviews over fifty years. In Conrad’s introduction, readers will get for the first time a rare look into the personal life of this very private man who actively discouraged any books about himself during his lifetime.

Christine Conrad’s close friendship with Robbins began in the mid-Sixties and lasted until his death. One of their most frequent ongoing conversations was the struggle to do good work. Conrad’s combined visual and textual narrative emphasizes the important threads running through Robbins’ creative work: his influences, working methods, perfectionism, fight for recognition and credit, and collaboration with key figures such as Leonard Bernstein, George Balanchine, and George Abbott.

In addition, Conrad has been granted rights to include select materials from highly personal journals that Robbins kept from 1972 to 1984 which are under restricted access according to the terms of Robbins’ will. The journals – written on Japanese rice paper notebooks – represent an extraordinary document of Robbins’ inner and outer life and are frequently remarkable candid.

Even those familiar with Robbins’ ballet, theater and film work will be astonished by the range of imagination displayed in these pages which provide a rich, visual illustration of why Robbins is considered one of the most important artists of the 20th Century. In a style that is at once accessible, visceral, and pictorial, the book celebrates Robbins’ extraordinary contribution to art and entertainment – providing a view of him that is a delight to the mind, the eye, and the soul.